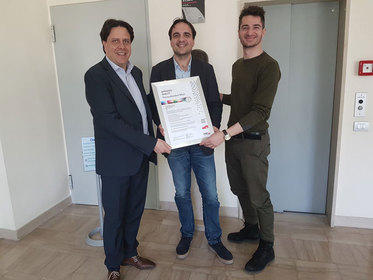 Grafiche Mercurio SpA was founded in 1962 as a small artisan company. Over time, the company was growing by investing in modern instruments and innovative technologies. In order to ensure a high level of standardization for its customers in 2012 the company, with the support of ColorConsulting, obtained the Fogra PSO certification and became the first company in Italy certified both for, sheet-fed and web offset printing.

In February 2017 the certification for the sheet-fed part has been renewed and confirmed for the third time! Demonstrating that the standardization for Grafiche Mercurio is not just an additional certificate to exhibit but a way of living business quality.

According to Mr. Dino Mercurio "The Fogra PSO certification generates a number of key benefits including:

-the optimization of production and its increase in productivity

-the simplification of working procedure

-it increases the quality and maintains it constantly

-the recognition of our professionalism by the international market."

For Grafiche Mercurio’s customers, the benefits are the assurance of a consistent and certified quality of the prints and an absolute chromatic adherence to the proofing print.